Online and mail-in balloting took place in March and April 2020 to select a lichen emblem for PEI. The clear winner was Frayed Ramalina (Ramalina roesleri). Nature PEI will be recommending the winner to the Government of PEI for consideration as an official provincial emblem. Thanks to all who reviewed the proposal and voted! 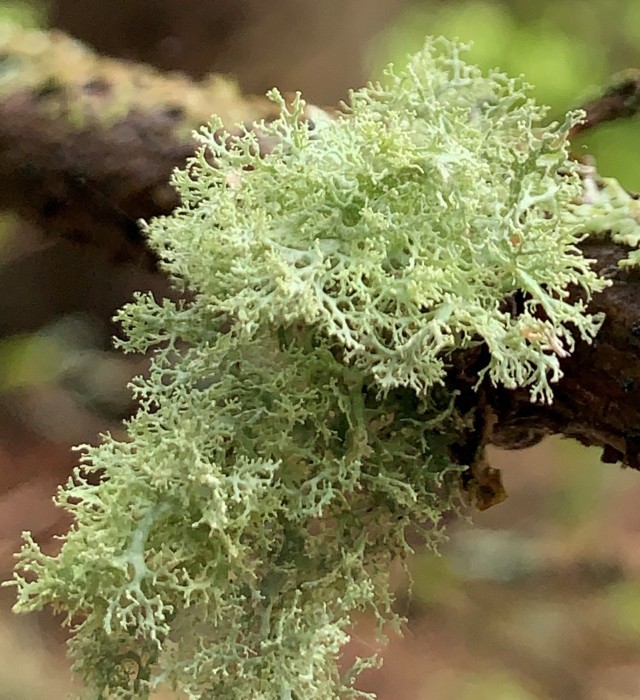 Frayed Ramalina (Ramalina roesleri) is a lichen that structurally resembles a branch or twig. It is found especially on hardwoods and conifers near the coast and less often on rock or wood.  It is finely crafted in pale white to yellow-green with main branches about 2 mm in diameter and powdery growths at the tips, called soredia, that enable vegetative reproduction. In North America, the Frayed Ramalina is distributed mainly in Canada and it can be found in northern forests around the globe. It is common in Prince Edward Island where it has been found in coastal bogs and woodlands throughout, and in some interior woodlands. This lichen may have some medicinal benefits. In Prince Edward Island, 328 lichen species have been recorded to date. The three other contenders in order based on their votes were:

Lungwort (Lobaria pulmonaria) is named for its lobed growth habit showing ridges and depressions like lobes of a lung. The lobes are as much as 12 cm wide and 7 cm broad. This lichen is found in shady locations on the trunks and branches of larger deciduous trees like maple and American Beech, and less commonly on conifers and mossy rocks. Lungwort has a tan to gray look when dry but is bright green when wet. If in doubt as to its identity, simply pour water on it and watch it turn bright green. The underside is fuzzy orange brown with paler patches. Though one of the fastest growing lichens, it does not reproduce until about 25 years old. It contains several acids that discourage snails and slugs from eating it and is widely believed to have medicinal properties. It has also been used a source of dye. Over-collecting in some countries has contributed to its scarcity, and it is also affected by air pollution and acid rain. Car exhaust prevents its growth in urban forests. Lungwort is distributed in suitably moist habitats on four continents and throughout Prince Edward Island. It is regarded as a species typical of old forests.

Pink Earth Lichen (Dibaeis baeomyces) is usually found on disturbed soil where competition from moss, herbs, shrubs and other lichens is limited. For example, it thrives on well-drained road banks in full sun where it helps to hold soil in place and build more soil. The whitish grey lichen body that covers the soil is called a thallus, and in this case it has a warty appearance. The fruiting bodies (apothecia) of the Pink Earth Lichen consist of a short stalk, about a half a centimetre, topped by a tiny turban of unmistakable pink. Its distribution is circumpolar in the northern hemisphere but in North America it is found mostly in the east. Though poorly documented on PEI by those who study lichens, it is common and can definitely be found throughout Prince Edward Island.

Bushy Beard Lichen (Usnea strigosa) is found in open sites on branches and trunks of white spruce and other conifers, and on deciduous shrubs and trees, including oak trees. Its pale yellow-green branches may have a reddish brown central cord, but this bushy lichen is most easily identified in the field because its branch tips support round bristly discs of pale yellow or even pinkish. These are the fruiting bodies known as apothecia. This species is distributed worldwide including in eastern North America where it is at the northern edge of its range in Prince Edward Island. It is common throughout the Island but is still poorly documented by those who study lichens. As with other lichens, it may have medicinal properties, perhaps providing relief from a headache.

The actual vote count was:

Thank you to all who helped in the selection process.